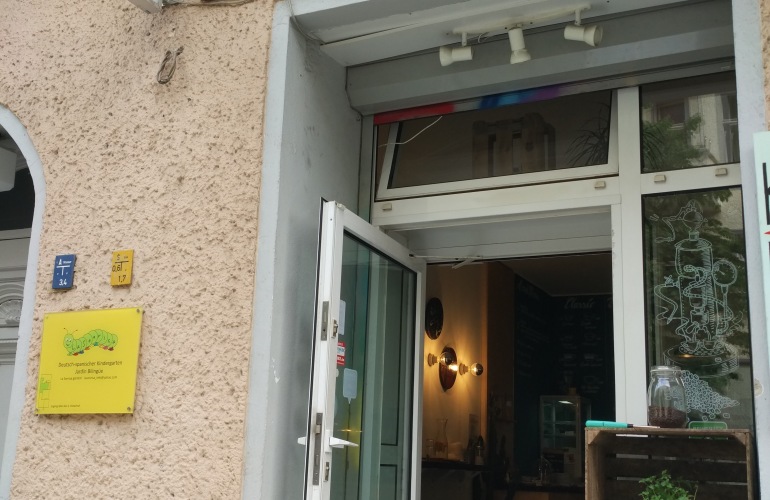 I’m not shy about the fact that I knew very little about Berlin before moving here. I found that it was a bit more exciting going into a new city with an open mind. One thing I obviously did research on was the city’s accessibility.  One of the main reasons I chose Berlin was for its perceived high level of accessibility…at least least with the public transport. I recently wrote a post about the Berlin transit system for a travel blog that focuses on accessibility. If interested, you can read that HERE.

Since Berlin is an older city, many buildings don’t have ramps and entrances suitable for wheelchairs. This problem also exists in the US but many buildings are much newer. The Americans with Disabilities Act now requires new buildings and construction to implement accessible entrances.  The German equivalent to the ADA also requires new buildings and construction to be accessible. The problem is, many cafes, restaurants and stores have one step into the facility and they don’t always comply by the law. One step is fine if I am using my manual wheelchair but becomes a problem for power wheelchair users. I am often visiting these places alone, so I am using my power wheelchair. Even a few inches is too big of a step for the power chair. This can make one step feel like whole flight. It’s probably good for my wallet that all the little boutiques have a step 🙂

Therefore I spend a lot of time emailing and messaging venues about their accessibility. It’s important to be really clear when I ask my questions. Some places come back saying they have one tiny step and express how it’s never an issue. But as I mentioned, really anything over 2-3 inches in too much for the power chair. Some places are very forward in saying there are lots of steps and our bar is small…so basically don’t come. That’s fine, I’ll spend my money elsewhere. It’s been really intriguing to see different responses. Many people apologize or express their willingness to help if they don’t have an accessible location. I think a lot of it is just awareness. Maybe they didn’t realize their shop wasn’t accessible to someone in a wheelchair until I asked. I try to be understanding and encourage places to purchase a movable ramp. In fact, a local vendor in Germany provides these awesome bad boys. I don’t expect venues to always follow up or even purchase the ramp .. but at least it puts an idea in their head.

One day something unique happened. I had emailed a little cafe in Friedrichshain called Sixty Degrees . They responded saying they had one step and had never had someone ask this question. They proceeded to ask if I had any ideas for improvement. Per usual I emailed them the ramp link and hoped they would maybe do something to fix the problem. To my surprise, one month later, they emailed me back telling me they purchased a ramp and wanted to invite me in for a coffee and cake on the house! I couldn’t believe what I was reading! A small business owner actually took the time to see that all customers felt welcome. They explained to me how the process took a bit of time because there are some regulations about objects that protrude into the sidewalk space, as it can be a hazard. (Germans are always worried about liabilities) I was impressed with their persistence. It really motivated me to keep emailing and encouraging venues to include ramps at the entrance.

The cafe was also super cute. It had a shared book library, vegan cakes, delish coffee and rotating art on the walls.

Below you can see a few pics of how easy the solution was. Hopefully I’ll have more exciting stories like this in the future. 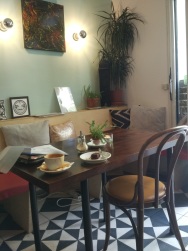 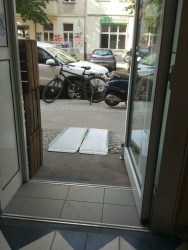 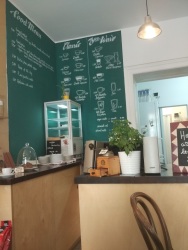 insights from a girl on wheels View all posts by gracelouise

One thought on “‘One Step’ away from beer, coffee and shopping”

There was an error retrieving images from Instagram. An attempt will be remade in a few minutes.